Enshin Karate is unique for its blend of circular strategy, rhythmic punching and kicking attacks combined with sweeping and throwing finishing techniques. Enshin is particularly well-suited to street encounters against multiple attackers that require the ability to respond quickly and flexibly to different opponents attacking from various angles.

Kancho Ninomiya’s strategies have proven highly successful in the Sabaki Challenge, and his innovations have been widely copied. However, not until the 1997 publication of his book called Sabaki Method did karate enthusiasts have the opportunity to explore every facet of Ninomiya’s strategic fighting system. 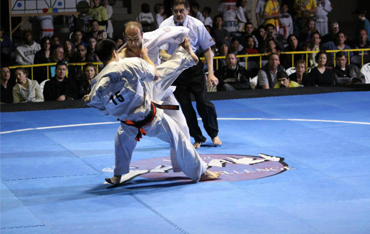 Sabaki is a Japanese word that means “usefully redirecting a force.” It describes breaking a horse or damming a river: turning natural energy into productive force. In Enshin Karate, it applies to turning an opponent’s power and momentum against him. Many Enshin techniques are based on moving to the outside of an attack, pulling the attacker off-balance and finishing him with a sweep or throwing technique that inevitably puts him on the floor.

The Meaning of Enshin
by Kancho Ninomiya 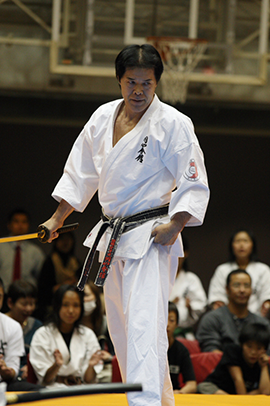 The name ENSHIN is derived from two Japanese words: “en” meaning ‘open or unfinished circle’ and “shin” meaning ‘heart’ or ‘inner.’ The combination of these two words and their meanings embody the most important aspects of Enshin Karate.

For me, above all else, the ‘inner circle’ of Enshin Karate represents the strong bonds that keep us together. The strength of this organization depends on the ability of each of us to listen to our hearts, and to relate to others through it.

The circle is the essence of the strategy and movement in Enshin Karate. The infinite points on a circle represent the unlimited positions we move to and counter from in meeting an opponent. This circular movement that takes one out of a line of attack and into a position from which he can counter attack is the basis for Enshin Karate technique.

The Enshin circle is an open circle. It is not complete, although it strives to be. It represents the idea that our challenge is never finished, although we are always working towards making it so. This unfinished state is a source of motivation and it reminds us that perfection is to be aimed for even if it cannot be achieved.

The middle ring in our logo represents the cycle that is the essence of our training as well as life. In training we begin as a white belt, and move through the darkening belts before becoming a black belt. When we achieve the black belt we begin anew. So, too, in life. Each goal we reach marks a new beginning.

The Enshin Karate-do is not the only Way. But I believe very strongly in it. It is my wish to offer Enshin Karate to anyone whose heart and mind believes with me in this Way. Then, together, we can all work to finish the circle. 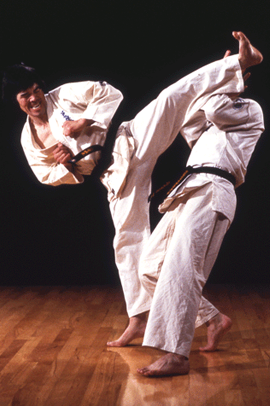 Taekwondo: As often seen in Taekwondo training and competition, kicks are the primary technique in this style. It is only suitable for a far range of combat when you can kick your opponent and stay away. Taekwondo is extremely vulnerable in close combat where a practitioner is within the reach of punches. It is totally useless in a small space like an elevator or when one gets involved in a grabbing/grappling situation.

Traditional Karate: Mostly teaches ancient linear rigid impractical movements and techniques. Usually it is limited to relatively weak punches and kicks only that can be easily blocked or evaded.

Judo and Jujitsu: These styles are mostly developed for a close range situation and are useless till one can grab an opponent. Grabbing, throwing, but not punches or kicks.

Boxing: A very good and dynamic fighting approach that is limited to punching only. It lacks kicks and grabbing control of an opponent.